The Real War on Christmas 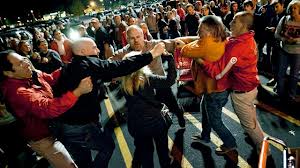 Every holiday season, we hear about the alleged “War on Christmas.” And while I’m definitely a Christian, I think we’re arguing about the wrong thing, while we ignore the real war on one of the two most important holy days in the Christian calendar. Here’s why I believe this.

The end of the year includes numerous holidays, for several religions. The fact that Christians don’t celebrate these days doesn’t matter; other religions and life ways do. Jesus taught respect and compassion for all people not just those who agreed with or followed him. This tells me that even though I don’t share other people’s faith, that I should respect them enough to allow them to follow the path they feel is best. To me, it is very unChristian and less than spiritual to look down on others because of a difference in theology.

The United States is not a Christian theocracy. In fact, many conservative Christians condemn theocracies in other parts of the world (and, I believe, rightly so). From its inception, our country was meant to allow for the beliefs of all peoples – not just varying denominations of Christianity, but all faiths. Many people don’t realize that two of our most important founding fathers were not Christian. Thomas Jefferson and Benjamin Franklin were Deists. They acknowledged a higher power, but did not believe that Jesus was the son of God. Nor did they believe the story of Jesus as it is related in the Bible. It’s hard for me to understand how anyone could misinterpret their beliefs and call them Christian.

I believe the separation of church and state as laid out in our constitution is crucial to our freedom as a society. I wonder how many Americans would be willing to subject themselves to the dogma of a different denomination. Would they be willing to live under Catholic law? Or Mormon? Would Baptists be willing to live as Unitarians? Jewish? Buddhist? Muslim? Why, then, do they believe it’s OK to subject others to the tenets of their own faith?

To use terms like “Happy Holidays” is not to deny the right of Christians to celebrate Christmas. Rather, it is way to show respect for the holidays (holy days) of other peoples. Limiting Christian displays on government property (or to allow displays from all religions) doesn’t deny Christmas. It only recognizes the need to treat all religions equally under the law. Doing so doesn’t prevent individuals, churches, even businesses from celebrating Christmas. No one is going to tell you to not have a Christmas tree in your home or business. No one is going to tell churches they can’t preach about Jesus and salvation.

To me, arguing about this completely ignores the real problem – the over-commercialization of one of our most important holy days – the birth of Jesus. Somehow, the gifts the three wise men brought have been thoroughly overblown into a sad display of over-consumption. And this pattern is in direct opposition of what Jesus taught. Jesus encouraged us to ignore the material world, to not pursue wealth and possessions as a means of happiness and fulfillment. Blessed are the poor, he said. To the rich man who wanted to enter heaven he said, “give up all you own and follow me.” 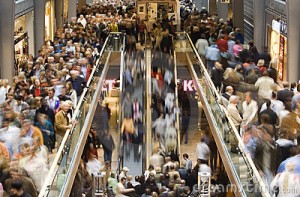 Even so, millions of people ignore this basic teaching and revel in how much they can buy, and how quickly they can do it. One need only look at the news stories about tramplings, riots and violence committed on Black Friday. People fight each other for products. They have even killed others to save a dollar. Now, Black Friday has invaded Thanksgiving, becoming Black Thursday. We can’t even pause one day to be thankful for what we have before heading out to buy even more. And let’s not even get into the fact that we are now hearing Christmas music, and seeing Christmas ads the day after Halloween.

Don’t get me wrong; I’m all for giving gifts at Christmas, although the same is not true for all denominations. I love giving presents to those I love, both in commemoration of the birth of Jesus, and as a way to show my love for them. But I don’t focus on how much I can spend. Instead I do my best to give gifts that will have true meaning… that show a deeper level of friendship and love by filling an important need or deep-seated desire. In addition, I encourage those who would give me gifts to not spend a lot of money. I’d rather get something I can use in one of interests – such as cooking – than I would an expensive bauble. One of my favorite gifts this year is a set of springform pans, given to me by my sweetheart’s mother. They meant a lot to me because they were the first gift I’ve received from her, and because the came at the perfect time. (I have to keep mum on this for now, but I’ll tell you about it as soon as I can. For now, however, it’s a secret.) 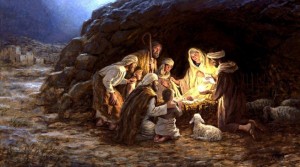 I opened the gift as soon as it arrived – because my darling knew what was inside. I was so thrilled that I immediately ran to the store to buy the necessary ingredients to bake a chocolate cheesecake. I had the best time making that dessert, and it was wonderful to have the first slice for breakfast the next day. I know, not the healthiest breakfast, but it was awesome! Later that day, it was great to let the giver know that I had used her gift immediately, and she was very pleased to know how happy I was. Would it have been better if she’d gotten me something more expensive? Not on your life! She got me something I wanted, and could really use. And every time I use one of the pans, I will think of her with love.

Instead of wallowing in over-consumption this year, let’s all step back a bit and really think about the “reason for the season.” Let’s remember that Christmas is first and foremost a celebration of the birth of Jesus. Let’s remember that it is a holy day, not an excuse to spend gobs of money, or to fight others over things. Let’s remember what Jesus taught us about materialism. And most of all, let’s be Christians, doing our best to follow the teachings we say we believe.

To my fellow Christians, I wish you a very Merry Christmas. To my other friends – of whom there are many – I wish you the happiest of holidays. May you all enjoy a peaceful, fulfilling and joyous season.