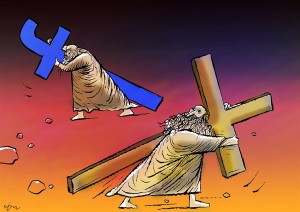 Like many of you, I frequent Facebook. And, like many of you, I am often overwhelmed by the number of religiously oriented posts, especially by those who call themselves Christians. What dismays me about the majority of these is how absolutely unChristian they are.

This is not to say that all posts about Christianity are bad, or wrong. But so many of them are that it boggles the mind. I’m often left wondering how some people can reconcile their actions with the teachings of Jesus.

Below are the main offending categories that I see:

1. I’m so great because I’m Christian

Certainly, it makes sense that most of us believe our personal faith is the best choice through which to lead a good, spiritual life. That doesn’t mean we should thump our chests in public and constantly call attention to our faith. Nor does it mean it’s all right to denigrate others who follow different paths.

Jesus taught us to be humble. He spoke about it often. For example:

“Whoever becomes humble like this child is the greatest in the kingdom of heaven.” ( Matthew 18:4)

Jesus also pointed out that a good Samaritan is better than a hypocrite who talks the talk, but doesn’t walk the walk.

“Look at me! Look at how Christian I am!” I ask you, how is this any different than those who Jesus condemned when he said:

“And when you pray, do not be like the hypocrites, for they love to pray standing in the synagogues and on the street corners to be seen by others. Truly I tell you, they have received their reward in full. But when you pray, go into your room, close the door and pray to your Father, who is unseen. Then your Father, who sees what is done in secret, will reward you. And when you pray, do not keep on babbling like pagans, for they think they will be heard because of their many words. Do not be like them, for your Father knows what you need before you ask him.” (Matthew 6:5-8)

Jesus teaches us that by praying publicly as a means of showing how worthy we are, we actually diminish ourselves in the eyes of God.

3. My God is Better Than Your God!

This is the close sibling to point 1 above. The interesting part of this is that this one often refers to Muslims, who also revere the Abrahamic God. Yes, it’s true that Islam doesn’t hold Jesus in the same regard as do Christians (but, then again, neither do Jews). Yes, Christians believe their religion is the best way to know God. But that doesn’t change the fact that there are two other religions (at least) who not only think of God in the same terms, they worship the very same concept of God.

4. You’re Not Christian Unless You Repost This

Often, these posts feature a graphic, consisting of mostly text, perhaps with religious iconography. At the end will be some version of “Repost this to get a reward, and if you don’t, you’re going to Hell.” Or… “Repost this to prove you’re a Christian.” I have to admit that, even though I know it’s wrong, I’m often tempted to leave a comment to tell them why I refuse to take part in this behavior. I am sorely tempted to write, “posting this stuff doesn’t make you a better Christian; it makes you worse.” But then, that wouldn’t be very Christian, would it? So, I normally keep my mouth shut and move on.

5. You’re Not Christian Unless You Agree With Me

If all Christians agreed on all points of theology, there would only be a single denomination. Some differences are very small, while others are very large. And I’m thinking only of Protestant sects. Bring in the Catholic church, and the Mormons, and the differences are even greater. That’s why, to me, this whole “my way, or the highway to Hell” thing is so stupid. In addition, many of these posts don’t really pertain much to the teachings of Jesus. Instead, they are social commentary masquerading as religious dogma. Often, they come from people who love to quote the Old Testament, yet still eat bacon, which makes the posts all the more ironic. The only thing that’s worse, I think, is the person who tattoos quotes from Leviticus across their chest… since one of the things Leviticus says is a sin is to get a tattoo!

6. It’s OK to Hate These People Because They’re Not Like Me

Nowhere in the Bible does Jesus say it’s OK to hate someone else, regardless of the reason. No. Where. In fact, it’s rather the opposite. Jesus preaches respect for others at all times, even one’s enemies. So to use the Bible as a defense for one’s hatred rings hypocritical to my ears.

The vast majority of the prayers I see posted (again, mostly through a graphic) read like spoiled children demanding more. I swear, if parents were constantly bombarded by similar demands from their children, they’d go crazy. And yet many think it’s OK to make demands for more from God. I often wonder if there is anyone who is actually happy with what they have.

It’s sometimes difficult for me to reconcile my work as a minister with the rest of my online life. I don’t want to constantly preach, and I don’t want to come across as constantly telling others how to live, or how great I am because I’m a Christian. Instead, I prefer to follow the teachings, and my own father. Dad was what I call a Walk the Walk Christian. If you listened to what he said, you’d never really know what faith he followed. But if you watched how he lived his life, you could see from numerous, constant examples that he was a Christian.

I would much rather that people took note of how I act, than of how I post on Facebook. Posting dozens of self-serving comments and graphics won’t make me a better Christian. It only shows me to be vain and self-centered… far more worried about what other pseudo-Christians think of me than about how God  perceives my life. Another thing I keep in mind is that, every minute I save by not posting such things is a minute I can spend in service to others… serving the greater good as taught by Jesus. And that, I believe, brings me closer to God than any Facebook post ever could.

What are your thoughts on this subject? Join the conversation by leaving a comment below. Please be respectful of others when expressing your views. Use the tiles below to share this post with your friends.